Help The Connected One find the Best Performing Agencies » 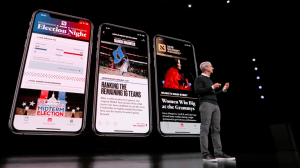 as it becomes available this fall.  Yesterday at a launch event Apple revealed a number of new services including News+.  Over 300 magazines, newspapers and digital publishers will be curated into the Apple News app that will be available in the US and Canada.  Readers will have access to content brought to you from publishers such as Vogue, National Geographic Magazine, Sports Illustrated, Wired, People, ELLE, The Wall Street Journal.

What Canadian content will be included in Apple News+

While the duopoly created by Facebook and Google have hurt many publishers advertising revenues, many have struggled to find new revenue opportunities. Will Apple be the savior?  As part of the 300 publishers being included in News+, Canadian content from The Toronto Star, The Hockey News, The Hockey News, La Presse, Le Devoir, CTV, Global News, St Joseph Communications.

“St. Joseph Communications and its growing portfolio of magazines is excited to be a part of Apple News+, bringing our great journalism to an even wider audience,” said Douglas Kelly, President SJC Media.

“Global News is thrilled to be a part of Apple News,” said Troy Reeb, Executive Vice-President of Broadcast Networks for Corus Entertainment. “Many Canadians already engage with our content on Apple devices and we are looking forward to what this enhanced experience will bring.”

“One of the key priorities at Bell Media is to deliver our content to audiences wherever they are, and we’re excited and committed to providing real-time leading news and sports information on Apple News,” said Randy Lennox, President, Bell Media.

“Being a part of Apple News will allow La Presse to continue its mission of producing quality journalism, accessible to everyone,” states Pierre-Elliott Levasseur, President, La Presse. “We look forward to working with Apple for many years to come.”

What Canadian content will not be included in Apple News+

It is no secret that Apple likes to take a large chunk of revenues in its partnerships, just ask Spotify who’s taken their dissatisfaction with the “Apple way.”  While none of the publishers have disclosed specifics on their respective deal with Apple, they do recognize the upside which is Apple will give them the opportunity to reach new audiences.

Surprisingly Globe and Mail and Postmedia are not taking part in Apple News+.  Both publishers have struggled with revenues over the years, but perhaps they have a see other ways to drive new revenue without Apple.

For its part, Apple Inc. is looking for ways to offset declining sales of its hardware — such as the iPhone smartphone — by adding a range of services that work with its various products, including the subscriber version of its Apple News.

You have reached content that is available to Pro+, Essential, Premium or Platinum members only.